So guys, kindly read this article till the end. And know about your favorite star. This will be so amazing.

Theidealthought Team here from Jaipur, Rajasthan. Welcome to our blog! And glad that you checked out this article Awez Darbar Wiki Bio. We hope you are doing well.

He is a social media influencer, entertainer, Indian actor, TikTok star and choreographer.

He is primarily known for his amusing talent, dancing skills, sync, and funny TikTok video clips.

Awez Darbar is one of the highest-paid TikTok famous stars in India.

In this part, we will know about Some personal information, family, girlfriend, education, favorite things & physical stats.

Awez & Nagma Open Up About Their Relationship | Viral City:

There are some rumors about Awez Darbar that he is dating Tik-Tok Star and Social Media Influencer Nagma Mirajkar.

Awez Darbar Wiki is going to be amazing. Stay tuned.

Do you know about Mr. Faisu Wiki

This is the main part of Awez Darbar Wiki. Let’s know about him & more.

Awez Darbar begins his journey in college days he wanted to become a dancer, choreographer and an actor since his childhood days and first time he performed a dance performance in his college festival.

As he says, choreographing in college festivals has performed a great role in extending his visualizing and creativity to his ability on the stage.

Awez Darbar also performed a dance with popular dancer Shiamak Davar International and after many batches got chose as a teacher in their foundation.

He worked there for over 7 years and began his own move organization named Ace Production.

He started a YouTube channel named “Ace” where he uploads all his dance videos in his college days.

Furthermore beginning commitment with his fan by social media like Instagram, TikTok, and YouTube. For the most part, he is popular for his acting, comedy and dancing videos.

The turning point of his career,

As he achieves an enormous fan following on the TikTok app and YouTube channel through his dancing and comedy videos.

Awez Darbar launched his dance institute named ‘’B You” in Mumbai with Zaid darbar and Tejal Pimpley and Biggest famous director Sanjay Leela Bhansali as a main guest at his party foundation.

His dance academy running successfully he continues uploading choreography videos on YouTube and TikTok account with many popular Bollywood actors.

He has worked together with numerous TikTok stars-like Jannat Zubair Rahmani, Mr. Faisu, Nagma Mirajkar and some more.

Awez Darbar has more than 2.45 million followers he represents his dancing skill along with some popular TikTok friend.

He has also promoted and endorsed a variety of different brands through her social media such as Oyorooms, Lifestyle stores, Central, Skybags, Myntra, Mobiistar India, Amazon fashion India, Avon, HDFC life, Jean-Claude beguine, 212 All Good and so on. 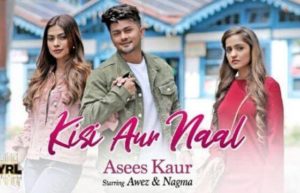 Another video song “Mera Mehboob” sung by Stebin Ben and again featured with her close friend Nagma Mirajkar. This song crosses over 50 million.

Nagma mirajkar and Awez darbar were featured in the music video of the song “Tum Na Ho” a song sung by Prakriti Kakar and Arjun Kanungo.

With Awez Darbar’s hard work and colossally stunning ability he figured out how to stand out enough to be noticed and today he is one of the great artists and TikTok stars.

He charges approximately 2 lakh per event. Awez net worth is $53 Million. He currently lives in Mumbai with his family.

Do you know about Manjul Khattar Wiki

Awez Darbar has given many media interviews on popular YouTube channels like Radio City India, Filmygyan and India Forums, for his songs “Kisi Aur Naal” and “Mere Mehboob” or for grand lunch on both of the songs these are the popular interviews of him.

What’s On My Phone With Awez Darbar | Phone Secrets Revealed:

On July 10, 2019; Awez, along with his brother Zaid Darbar and Tejal Pimpley, launches their dance academy named “B You Academy”, which was inaugurated by popular director Sanjay Leela Bhansali.

Since his childhood he want be become a dancer and actor.

In childhood, his father’s Ismile Darbar wanted to make him a singer and he also attends singing classes to learn music.

Awez Darbar has had the pleasure to perform at the renowned KIKI.

Awez Darbar is an animal lover he loves cats and dogs a lot they are his favorite pets.

He lives his life restful and luxurious. Aside from glamour, he enjoys his work and his dancing academy videos. He totally focused on his career.

He likes to play basketball and football.

He doesn’t smoke and he does not drink alcohol.

Did you read: Aashika Bhatia Wiki

Ans. Awez Darbar’s father is an Ismile Darbar he is a popular musician and music director.

Ans. Yes, he is the son of musician and music director Ismail Darbar.

Ans.There are some rumors about Awez Darbar that he is dating Tik-Tok Star and Social Media Influencer Nagma Mirajkar.